For the up and coming season the Captian of the Leopards team will be Ronnie Ansell, a fantastic character in the team and someone they all look up too.

For the Vice Captain Alfie Doughty will take on the role, a awsome defender and always gives 100% in training and matches 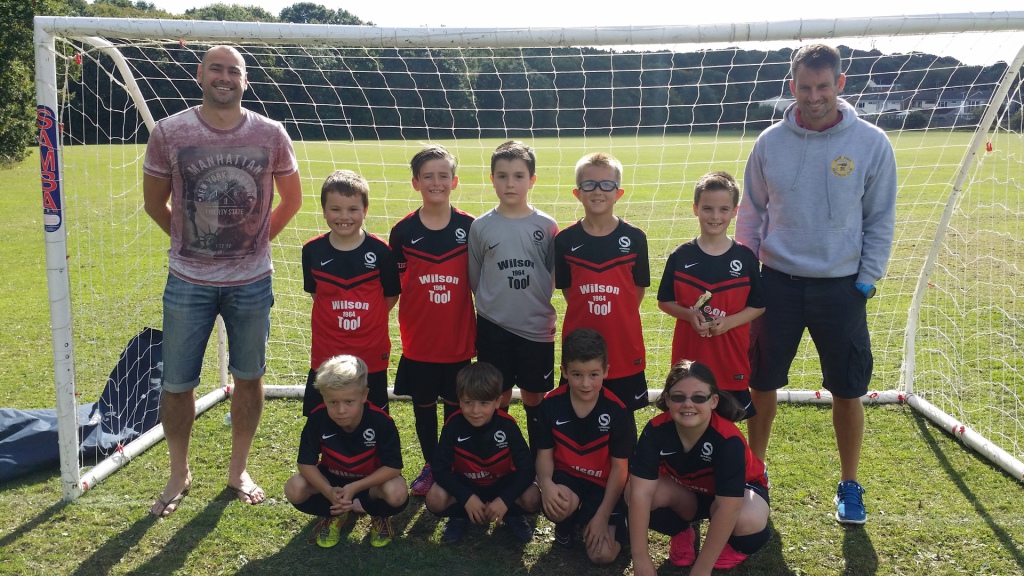 Only 7 available players so that made Myself and Gary's life much easier on the sideline, no need for the stopwatch to give everyone a fair share of the game.

Before the game we asked the boys to try and play simple football, to do the basics well. We recognised the pitch was in a terrible shape, so we asked the boys to get the ball into the wider areas where the pitch was better and for Alfie and Zak to use their pace to play like proper wingers. We asked Spencer to play in defence, recognising that he would be able to get the settled on the ball and to start out passing game going alongside Christian.

When the game kicked off I think it's fair to say, the oppositions style of football was a complete contrast to what we ask from our boys. It was basically a display of long ball, give the ball to the boy that can kick it the furthest and everyone else chases it. It's the first time we've come across this style, it would have been easy for boys to drop deep to defend this, but I felt it's important to play a high line to get them to adapt to us not the other way around. The contrasting style from the opposition meant than we often rushed our play in the first half and we lacked composure in areas at times.

The first half was a good battle, one which I felt we won. We had good opportunities to score their keeper made some good saves. The goal we conceded typically came from one long hopeful ball which their striker ran onto and finished well. A disappointing goal to concede at any level of football.

We couldn't fault the work rate from the boys, or the fact that they tried to play football in the way that we had asked. At half time we reiterated this, telling them to continue working hard off the ball, but to settle when in procession, pick your passes early and make the other side run harder chasing the ball. We also recognised that Zak could be the one to change the game, telling him that if he puts a few tackles in and plays with confidence on the ball then he will pull our team over line and we would beat this side.

The second half started and we looked really good, we looked up for it from the kick off with Freddie playing a very neat ball down the wing to get us quickly on the front foot. Good chances followed this and their keeper made some really good saves, we had good crossed coming in from the wings but couldn't convert the chances. We had one great chance and their number 11 made a fantastic tackle on the line to deny Zak, other chances fell to Harry, Zak and Alfie.

We then conceded another goal, totally against the run of play. A big looping long punt that bounced on the hard surface in front of Tommy. A chancers goal, but our heads remained high and we battled on.

We made a change, recognising that Zak was becoming more influential in the game we felt that his pace up front would give us a chance of scoring. So Freddie moved to left midfield and Zak went up front. We asked Zak to play very high as we knew we would be able break from midfield. Not long after the change the ball broke on the half way line, Christian with great vision picked his pass very early and rolled Zak in leaving him one on one with the goalkeeper. Their was only one outcome from that point, Zak finishing very neatly in the corner. 4 mins of play remained and Christian shouts to Zak to get the ball out of the net. Great thinking Christian and a terrific attitude.

Our tails were really up now, the boys continued to dig in and fight for every ball. Tommy then made a fantastic save coming off his line to clear the ball and the momentum stayed with us. I felt that Harry had a good grip on the game he out battled their boys in midfield and outplayed them throughout the game. He managed to get on the ball in our own half and drove forward with the ball, he seemed to glide past 3 or 4 of their players before hitting a good shot which the keeper could only palm onto Zak, Zak had moved well into the box and knocked the ball in. A massive cheer from our boys, it's as excited as I've seen them on the pitch. It was 2-2 and practically the end of the game.

At the final whistle another big cheer from our boys as they all congratulated each other on a team performance. It felt like a win, a smash a grab draw that was probably less than deserved.

Some big performances on the pitch, I felt they all played well. Difficult to pick a man of the match. Harry was solid and played simple football, Spencer was tough at the back, Christian pass to Zak got us back in the game, Freddie worked tremendously hard up front, Tommy bounced back from the second goal with an outstanding save. But Alfie one lots of tackles against the big lad on the other side and turned their team around with driving runs forward and crosses to create chances. However, Zak in the second half terrified their team, the continued shouts from their manager to watch our number 7 says it all. When Zak went up front he not only scored the 2 goals to get us the draw, he put in two very strong tackles high up the pitch - this gave us our momentum and changed the game, this for me is why the two goals came. Zak is technically a very gifted footballer, if he played with more confidence each week and put in those types of tackles from the start most of the teams we play against would be frightened to play against him. Well done Zak you were awesome today.

Two games remain, Ashingdon boys this coming Sunday and Catholic the week after. Let's hope we get two big performance from our kids as we look to finish the season on high.

Supreme Youth are looking to recruit new players for the up coming season at under 6 ,7,10 and under 11 age groups, if you would like your child to be apart of a Supreme Youth team come along on a Saturday morning @ The Glen, Glenwood School, Rushbottom Lane, Benfleet

Any ability is welcome!!!